THERE were four of us that night. There were usually two and there were sometimes three but that night there were four of us so we all pitched in for a Murree whiskey and a rickshaw to get the Murree whiskey and a hundred rupees more to pay the police, but the police didn’t stop us that night so we got some crisps and some plastic cups and two cold cans of Coke instead. It was a cold, crisp night. Winter drowned autumn in the Indus early that year and by then autumn had crossed the delta and was far out in the waters of the Arabian Sea before anyone could buy a jacket or a scarf or a pair of those thick, woollen socks that itch like hell.

It was Shayan’s idea to break into school.

“Okay,” I said, turning to the rickshaw driver, “turn that way.”

“Okay,” said the rickshaw driver. He turned that way.

“Are you both mad?” asked Yasir.

“Now turn there,” I told the rickshaw driver.

“Okay,” said the rickshaw driver. He turned there.

Shams punched him once, hard, on the shoulder.

“Stop!” I said to the rickshaw driver. He stopped.

We clambered out and I fished a grubby note from the back pocket of my bluejeans and gave it him.

“Thank you,” I said. The rickshaw sputtered off down the darkened alley and we stood there with our paper bags and plastic cups and our two cold cans of Coke and considered the dark gate that loomed before us.

“I know a way in,” said Shams and he marched off, knowingly. We followed him. He had a big brother who knew things and he led us all the way around the school to the back. He pointed at a section where the barbed wire had fallen off but he needn’t have; Shayan and I were already making for it.

“Would you like another punch?” offered Shams. Yasir declined.

Shams went first and we passed the paper bag to him and he jumped down the other side and whistled the old all-clear and we followed — first Shayan, then me, then Yasir who sat right at the edge of the wall and stared down at us until Shams pulled at the cuff of his pants and he tumbled onto the dirt floor below.

We were at the edge of the overgrown soccer field that stretched behind the school and we walked to the black-and-white striped goalpost and sat by it. The school was shrouded in darkness but we could see a lonely light in a room at the top of the east wing.

“Then we’ll have to share the whiskey with him,” said Shams.

“Guys,” I said. “I read something today. It’s a poem by this guy called James Arlington Wright — ”

“Yes,” I said. “Arlington. Do you guys want to hear it?” They did. I pulled out a crumbled piece of paper and smoothed it down on my thigh and cleared my throat.

I sneaked a glance at them, then, and they all sat with their hands wrapped round their knees so I went on.

“All the proud fathers are ashamed to go home, / Their women cluck like starved pullets, / Dying for love. / Therefore, / Their sons grow suicidally beautiful / At the beginning of October, / And gallop terribly against each other’s bodies.”

No one said a word. After a while, I scrunched the scrap of paper back into my bluejeans and lay back with my head on Shayan’s shin and the others lay back too and we lay there like that, the four of us, and watched the stars shine above the school that night as another winter began in Karachi. 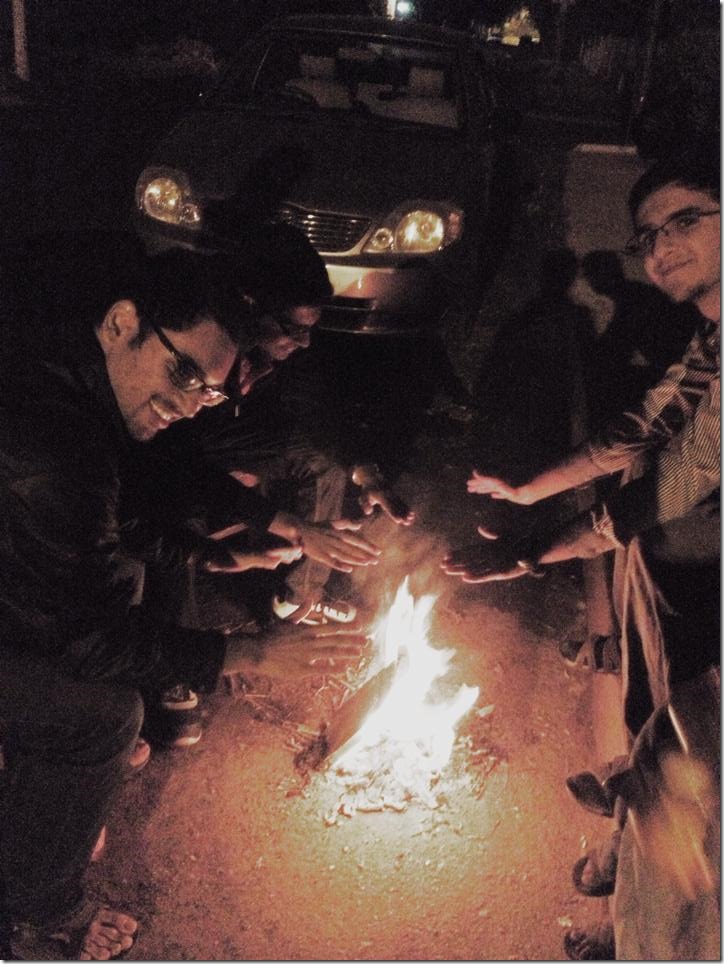 Coffee and cigarettes,
Sufis and saudade:
A moment — or two —
Just one moment — just two —
Snatched greedily from
The dark.

Watch the stars and sunsets.
Watch the hourglass recede.
‘May you live and love’,
Said he.
‘Mayflies!’,
Said he.