some nights the wind whistles

through the old lighthouse and

in the town below the mothers

tuck in their children and close

their shutters and watch their

some nights you tell me stories

of the village graveyard with the

night watchman and the magic

stick whose tip-taps are the

measure of the night.

some nights the stars are so close

that you forget. i dream of old

souls haunting the highways of

the heartland. this late, love,

the night belongs to students

some nights i hear a piano; two

notes hesitant in the dark. your

name is now a stranger on my

lips. how could it come to this?

how could it come to this?

If there is only enough time in the final

minutes of the 20th century for one last dance

I would like to be dancing it slowly with you,

say, in the ballroom of a seaside hotel.

My palm would press into the small of your back

as the past hundred years collapsed into a pile

of mirrors or buttons or frivolous shoes,

just as the floor of the 19th century gave way

and disappeared in a red cloud of brick dust.

There will be no time to order another drink

or worry about what was never said,

not with the orchestra sliding into the sea

and all our attention devoted to humming

whatever it was they were playing.

I WENT to my grandfather’s grave today. It’s high up on the side of a hill and to reach it you drive up through secluded streets shaded by large trees and there, between two houses, is a tiny blink-and-you’ll-miss-it lane. It’s so narrow that even if you’re small, you can reach out really, really far and touch the dusty whitewashed walls on either side.

As you emerge from the lane you find yourself at the top of a hill, all of Karachi spread out before you; below you grave after grave until your gaze rests at the foot of the hill. That’s a hell of a view, you think, this is a good a place as any to be buried. And imagine what it must look like at night with all those city-lights sparkling under the stars.

You pass headstones and shaded tombs and carefully step over mounds — some so heartbreakingly small that you don’t want to think. All of them carry a story.

EAT WELL, DIE YOUNG, AND HAVE A GOOD LOOKING CORPSE says another.

One of the smaller ones has a red bicycle with black handlebars carved carefully into the marble. Underneath, in small, neat letters it says LOVING SON RASHID YOUR GIFT CYCLE. 2000-2009.

There’s a small staircase that leads down to my Nana’s grave. And there’s a small, white marble bench at the foot of it for visitors. The caretaker comes and washes the grave and then I lay the rose petals on it and say a small prayer. As the caretaker leaves, he tells me how my grandmother came just yesterday. She’s here most days, he says. Sits just there, on the bench, till sunset. He walks away up the staircase.

And now I have to sit because my vision is blurry and my legs feel strange and I can smell the rose petals on the sea breeze. And I think of her, sitting here all alone, day in day out, even though it’s been three years, sitting on that bench that looks over Karachi and the grave of the man who spent his whole life with her and I wonder at a loneliness I can not begin to imagine.

At the end of his book Contact, astronomer Carl Sagan writes that for small creatures such as we the infinities of the cosmos are made bearable only through love. We need the enveloping arms of those we love, ready to catch us when we grow dizzy from contemplating eternity.

And as I lie here on the roof watching Sirius twinkle across the vastness of space and the immensity of time, I realise he knows what the hell he’s talking about. 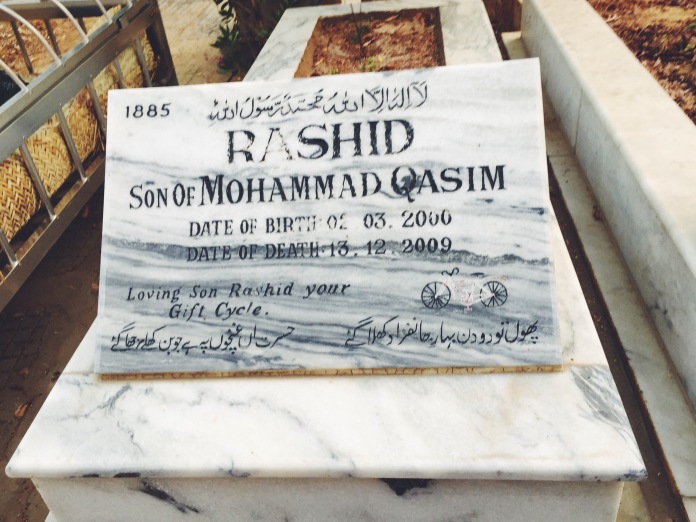 “The flowers did show us spring for a while / yet I long for the flowers that never bloomed at all.”